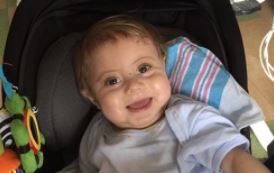 A baby with Alpha-1 who desperately needed a liver transplant found the perfect match when his godmother came through with the lifesaving gift. Eight-month-old Finn O’Sullivan has both Alpha-1 and biliary atresia, a rare disease of the liver and bile ducts that occurs in infants. Getting Finn a new liver was “exceedingly crucial,” said Adam Griesemer, MD, one of Finn’s transplant surgeons and the assistant attending physician at NewYork-Presbyterian/Columbia University Medical Center.

“He would not have lived for long,” Griesemer said, adding that Finn’s dual conditions are “pretty unusual” and that this is the first time he has seen a child with this combination of issues.

Kate Mullen, Finn’s mom and the lifelong friend of Sarah McKitterick, Finn’s liver donor and godmother, waited to find out who among their family and friends might be a match for the baby.

“I knew I was the one,” McKitterick told ABC News. “She was steadfast from the beginning that it was her,” said Mullen, who lives with her family in New York City.

The two women grew up as next-door neighbors in New Hampshire. They, along with McKitterick’s younger sister, Lindsey, “were the founding and only members of what they called the Crystal Club,” she said. Mullen’s mother was Sarah McKitterick’s ballet teacher for 16 years. Later in life, Sarah McKitterick and Mullen were roommates. Mullen said that she never wanted to influence McKitterick’s decision to donate.

“When she said yes, it brought me to my knees, literally.”

Finn’s strength has been returning since he received 15 percent of McKitterick’s liver on April 18. “The first time I saw him [after the transplant], I saw the whites of his eyes, something I had never seen before. He has been so ill, so yellow,” McKitterick said. It was an emotional moment for her, she said. Donating part of her liver to Finn was “an honor and a privilege,” McKitterick said.

And it was a role she was prepared for, Mullen said. “I sent her a message [before the transplant] and said ‘If you want to stop here I will be forever grateful for the rest of my life.’ and she just said, ‘Stop it. I’m doing it.’”

To read the full written story about Finn, click here.

Source: ABC News, the US Alpha-1 Foundation, and Finn’s grandfather Denis O’Sullivan in Cork who has been updating the Alpha One Foundation about his brave grandson. Wishing Finn a full and speedy recovery.