Decision Not to Fund Respreeza 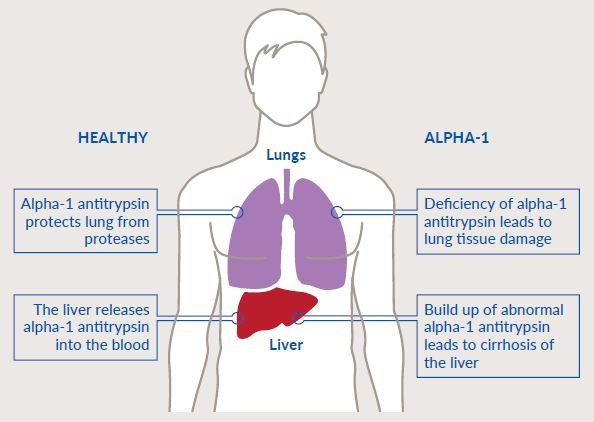 The Alpha One Foundation is calling on the Minister for Health to intervene following a decision by the National Centre for Pharmacoeconomics (NCPE) not to approve funding of the life-changing therapy Respreeza. Respreeza is the only proven treatment that slows the progression of emphysema caused by severe alpha-1 antitrypsin deficiency (AATD) or Alpha-1.

However, approval for reimbursement has been declined by the NCPE at the €84,364.80 (ex VAT) cost submitted by its maker, CSL Behring. The Foundation is also calling on the pharmaceutical company, CSL Behring, to reduce the high price of this life-saving drug and lift its current January deadline to stop providing the therapy to 21 people** who have been receiving the drug on a compassionate basis – some for almost ten years – since a clinical trial of the therapy (known as the RAPID study) got underway in Ireland in 2006.
These patients are understandably concerned and anxious having been given a series of deadlines by which the company would cease to provide the therapy free of charge. The first deadline was at the end of September, the second deadline was the end of December, and the latest deadline is the end of January 2017, when the company will decide on whether to continue the treatment in these cases. The decision also means that a further estimated 40 patients who it is thought would be eligible for the therapy continue to face an excessive wait.
The RAPID study featured 180 Alpha-1 patients and was conducted in 13 countries worldwide under the supervision of 29 principal investigators. Published in The Lancet in July 2015, the study conclusively found that Alpha-1 patients treated with Respreeza saw a significant slowing down by 34 per cent in the progression of lung disease (emphysema), as measured by CT scan. As a result of these findings, the therapy was licensed by the European Medicines Agency in July 2015. A second study in Lancet Respiratory Medicine published on December 2nd 2016 collected data over an even longer period of four years and confirmed the results of the first study, showing the persistent and major benefit of this therapy. The decision not recommend reimbursement by the NCPE does not reflect the clear and proven results from both of these large international studies.

Alpha-1 is the most common genetic lung disorder in Ireland. Alpha-1 antitrypsin is a protein whose main function is to protect the lungs from infection and irritants such as tobacco smoke. A deficiency of this protein can lead to symptoms such as breathlessness, wheezing and cough with phlegm, and can cause severe lung, liver and skin problems. The majority of people with Alpha-1 present with emphysema or chronic obstructive pulmonary disease (COPD). Currently, approximately 350 people have been diagnosed with the severe form of Alpha-1 in Ireland.

Hugely Disappointing
Kitty O’Connor, CEO, Alpha One Foundation, is calling on the Minister for Health to intervene and for CSL Behring to reduce its high price and to lift its January deadline for those clinical trial patients currently on the therapy:
“This decision is hugely disappointing. It serves only to cause unnecessary distress to people currently receiving the therapy following on from the clinical trial here. These patients have been told by the pharmaceutical company a number of times over the last six months that supply was being stopped – the latest information is that at the end of January, patients will be told whether the treatment will continue.”
“More than that, it also prolongs an already agonising wait for the estimated 40 people thought to be eligible for the therapy but who continue to suffer unnecessary health problems and deterioration in their quality of life.”
“We know from the clinical trial conducted in Ireland and in 12 other countries, that Respreeza has been life-changing for Alpha-1 patients. Not only has it been conclusively shown to significantly slow down the progression of disease by 34 per cent, and therefore increase life expectancy, but we know from our own research amongst people currently receiving it that it has made a huge difference to their daily lives.”
“Irish people on Respreeza here strongly felt that the drug had stabilised their condition, with almost 84 per cent reporting an improvement in general symptoms. This was supported by a reduction in the frequency and severity of chest infections and associated hospital admissions. Chest infections per year dropped by 68 per cent while hospitalisations caused by chest infections per year dropped by 69 per cent. People also reported improvements in their ability to work and to lead an active and fulfilled family and social life.”
“This form of therapy is already available to patients in eight European countries, including Portugal, Italy and Spain, as well as in the United States. We are imploring the Minister to intervene urgently and to negotiate with CSL Behring for a solution that works for all those eligible to receive this treatment. We call on the Minister to review the process for assessing new therapies and consider the implementation of outcomes-based models of access.”
“We are also calling on the pharmaceutical company, CSL Behring, to reduce the high price of this life-saving drug and to stop presenting patients who took part in the original clinical trial with deadlines for when the therapy will cease being provided to them. These patients have been of huge service to the company in its research endeavour and they deserve better treatment than to be faced with the constant threat of having their medicine taken from them. Overall, this situation is desperately unfair for all patients already doing their utmost to deal with a very challenging condition. It is the worst possible time of year for people with Alpha-1 who are very prone to seasonal ‘flus and debilitating chest infections. Respreeza has been shown to be life-changing for many of those lucky enough to be able to access it to date. But this shouldn’t be about luck.”

There was coverage of the NCPE decision on the RTE 9 o’clock news last Friday, December 9th, and it has also featured in several newspapers and on several local radio stations.

About Respreeza
Respreeza is a medicine that has been approved by the European Medicines Agency in July 2015 for use in adults with alpha-1 antitrypsin deficiency, an inherited disorder that can cause lung problems such as emphysema and COPD and which may also affect the liver and skin. It works by replacing the protein that is lacking in patients with alpha-1 antitrypsin deficiency and slows down damage to the lungs in patients with severe disease. It is delivered once-weekly by intravenous infusion. This form of therapy is available in eight European countries – Portugal, Italy, France, Germany, the Czech Republic, Austria, the Netherlands and Spain – as well as in the United States.

To read more about Respreeza and the RAPID study click here.