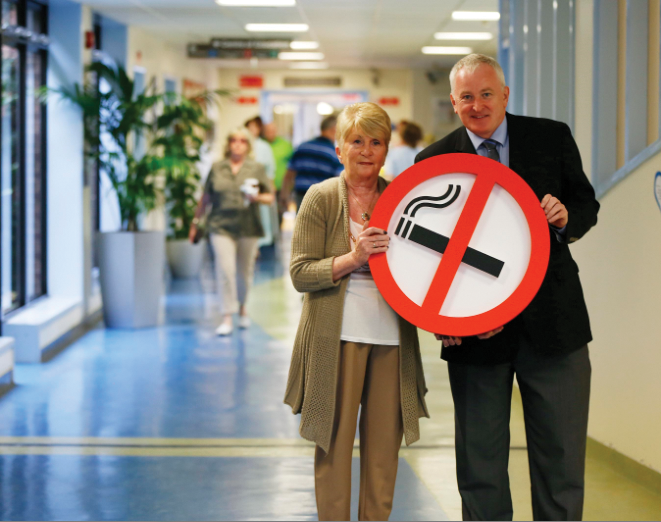 Not many people have heard of Alpha-1 and it was new to me until about nine years ago when my brother died.

Alpha-1 antitrypsin is an important protein produced by the liver that acts as a protection for the lungs from the destructive actions of lung illnesses and exposures to environmental factors such as tobacco smoke. People with Alpha-1 are lacking in this protein.

It is a genetic condition. The doctors reckon that if both parents are carriers of the condition, there is a one in four chance their offspring will have Alpha-1. Three out of my 10 brothers and sisters have it. Three of us also have haemochromatosis, which is also an inherited disease. This can also affect the liver. Everyone else gets a few bob from their parents, but we got two diseases. All four of my children are carriers of the disease, but none of their partners are. So they are in the clear. 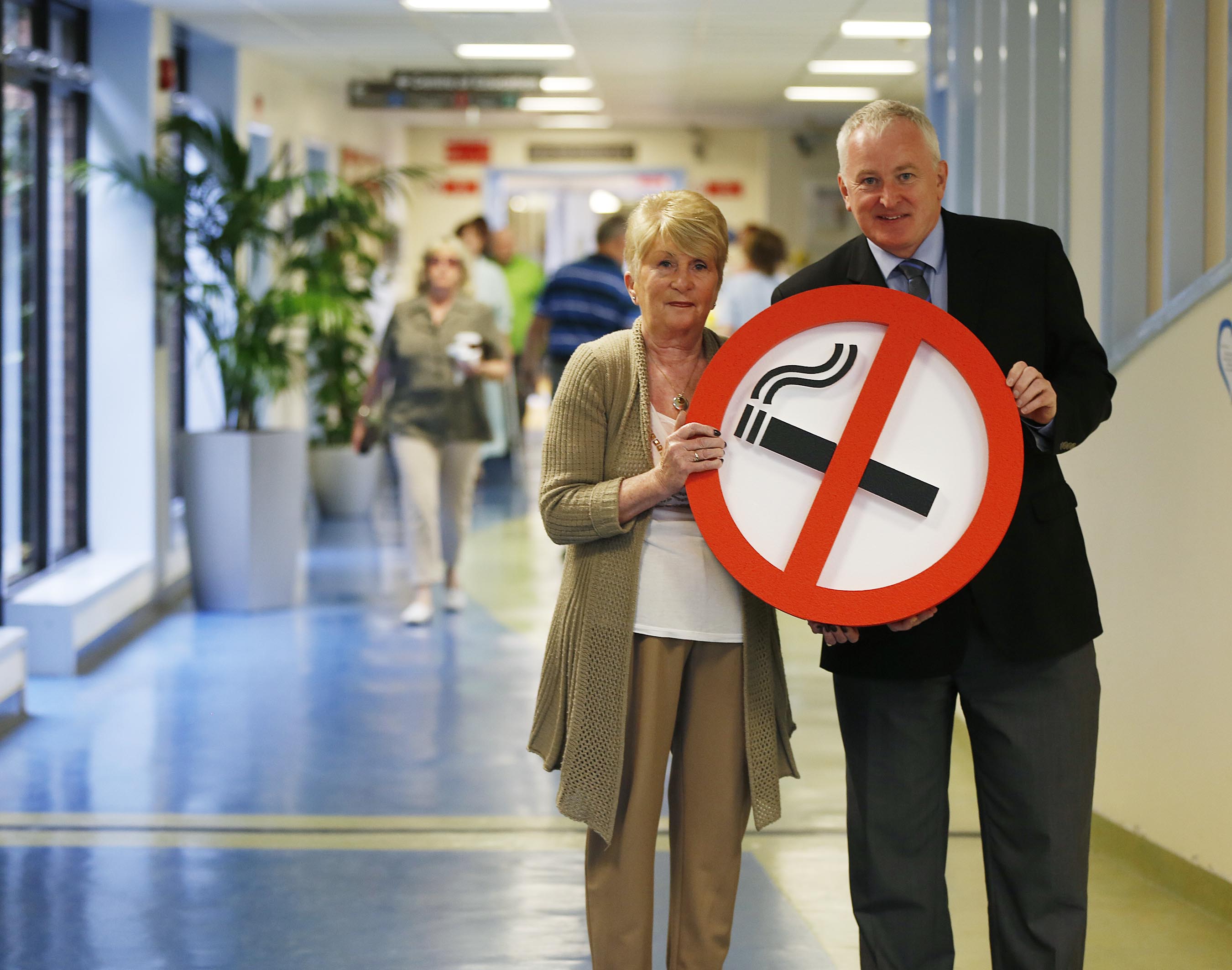 Before the move I was finding going up and down the stairs difficult. Someone mentioned a stair lift and, if I could, I would have run a mile. I decided to move, instead of getting a stair lift. Now out in Bettystown I go for a walk on the beach as often as I can, but I have to stay in from the breeze. I have noticed a big difference in my health since we moved. Sometimes I forget that I have anything wrong with me at all.

Three years ago I was asked to go on a trial for a new drug for people with Alpha-1 called “zemaira”, which is supposed to replace the missing protein. For the first two years I didn’t know if I was on a placebo or the drug itself. Now the trial has been extended and this time I know that I am on zemaira. I have improved a bit. A nurse travels out to give me the drug by infusion every week.

I had no hesitation going on a drug trial. Maybe it is because I am older and I feel that if I can help anyone else it will be worth it. Mostly I want to raise awareness about the condition. There is so little knowledge about the condition that a lot of people are being treated for asthma when really they have Alpha-1. Most GPs have not heard of it. Testing for Alpha-1 is simple – it is just a finger prick test.

People say that I have a great outlook on life. I just take on board what life gives me. What else can you do?

When I was initially diagnosed I was a bit frightened because my brother had died. But he had other complications and didn’t have the same access to services as I have. My other brother with alpha-1 is 53. He has no sign of disease in his lungs. He never smoked and is very active. The doctors keep an eye on him. 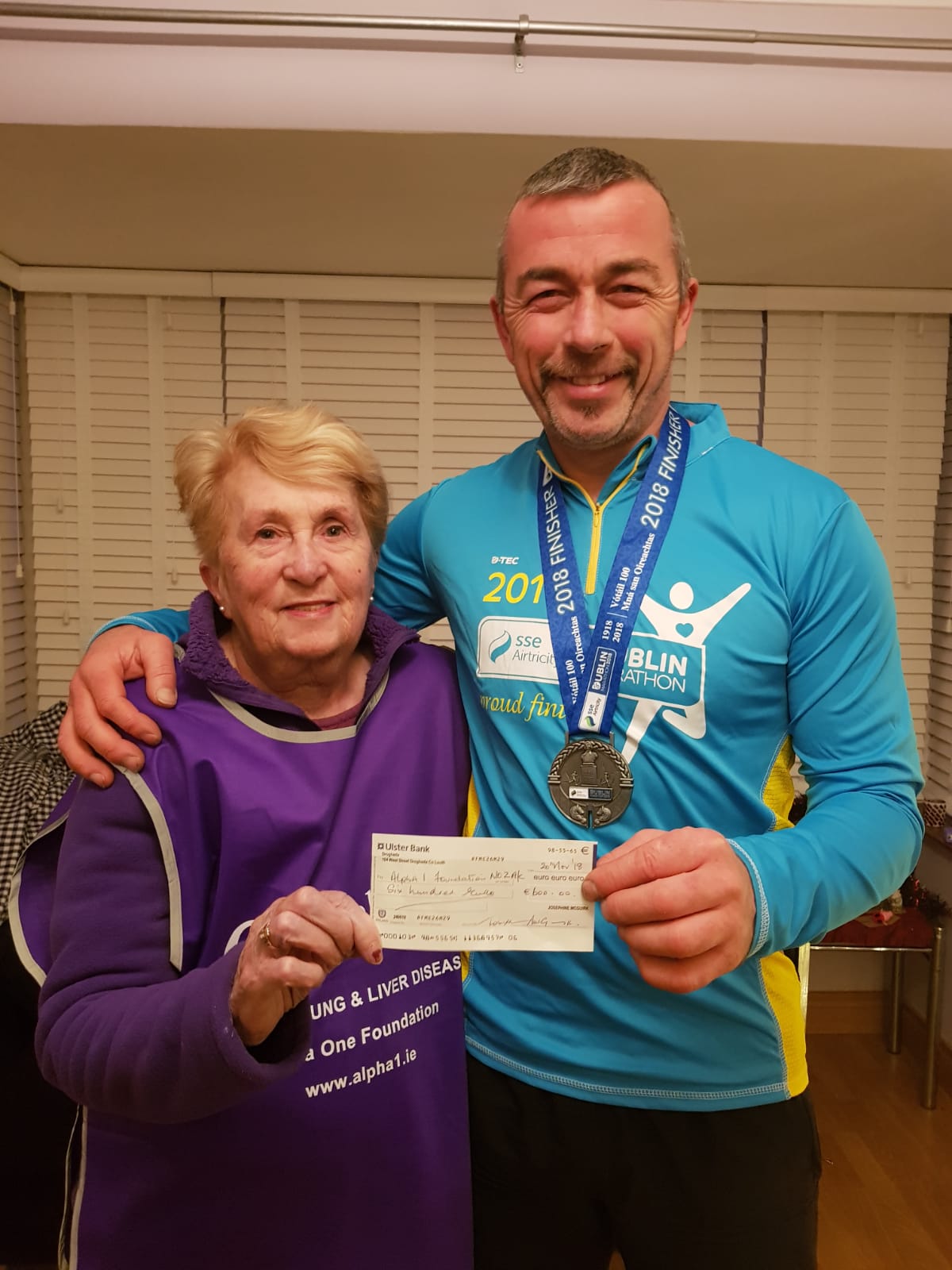 Josephine McGuirk pictured with her son Colin who ran the 2018 Dublin Marathon in aid of Alpha-1 Foundation Ireland.

I am doing well. I am on inhalers to open the airways in my lungs. I get the ’flu and pneumonia jab and try to stay away from people who are coughing and spluttering. The more chest infections you get, the more your lungs are damaged. I am involved in raising money for the Alpha-1 Foundation Ireland charity. I walked the ladies mini-marathon last year and hope to do it again this year.

I am not one of those strong anti-smoking people. I feel sorry for people trying to give up. I know how hard it is, but it is worth it in the long run. I had tried to give up smoking for years, but when I was diagnosed with emphysema I went for hypnotherapy. My last cigarette was the cigarette I had just before I went into the hypnotherapist.

An edited version of this article appeared in the print edition of the Irish Times, April 21st 2009.