The Clock is Ticking. Again. 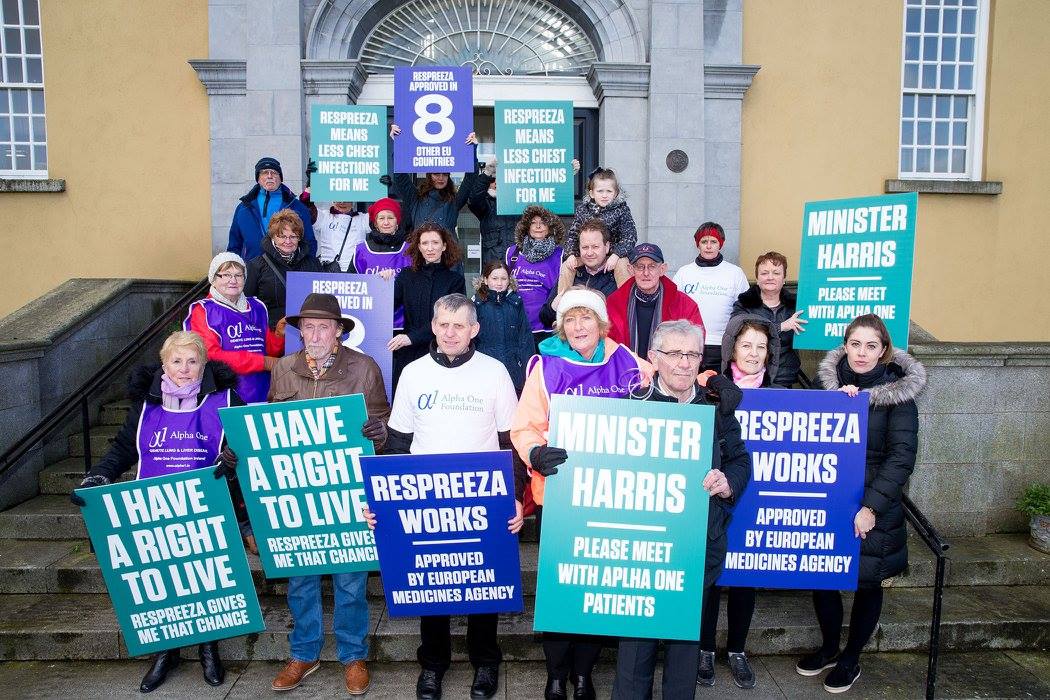 With just 30 days to go, the clock is ticking towards a May 31 deadline when pharmaceutical company, CSL Behring, has indicated that it will withdraw its Respreeza therapy from 21 patients with the condition known as Alpha-1 (or genetic emphysema).

Against this backdrop, on behalf of patients, the Alpha One Foundation is today imploring the company to lift its proposed cut-off of the drug. It is also calling on both CSL Behring and the HSE and Department of Health to enter into real and meaningful discussions to agree a fair price for reimbursement of the therapy. Respreeza is the only therapy shown to slow the progression of Alpha-1, resulting in a decrease in the frequency and severity of chest infections and associated hospital admissions.

Kitty O’Connor, Chief Executive of the Alpha One Foundation, comments:

“May 31 is the latest deadline from the pharmaceutical company, CSL Behring, when it has said it will remove the life-changing Respreeza therapy from 21 patients with Alpha-1 on the island of Ireland.”
“The vast majority of these patients generously participated in a clinical trial here which was a vital part of its initial clinical research. The company argues that it has continued to provide this therapy to people on compassionate use grounds. However, we believe that it is unfair that patients who have served the company so well should continue to live under a cloud of deadline after deadline, with all the stress and worry that involves, and on top of having to manage a very challenging condition.”

“Therefore, the Alpha One Foundation is calling on CSL Behring, in a spirit of goodwill, to lift the May deadline to allow for discussions to take place in a calm and conducive atmosphere.”

“The Alpha One Foundation is also calling on the HSE and the Department of Health to meet such a goodwill gesture from the company with a real commitment to enter into meaningful negotiations to arrive at a price for the therapy that is favourable to all concerned.”

“The Alpha One Foundation met with the HSE in February. We pointed out new research demonstrating the positive impact and benefits of Respreeza which we believe had not been properly taken into account as part of the initial NCPE decision. We asked for the HSE and, in turn, the Department of Health to look at this new evidence objectively.”

“Since then, we are aware of one meeting having taken place between the HSE and CSL Behring, however, there has been no indication of any progress made. While welcome that both parties have had some engagement, we need a renewed sense of urgency that will bring this protracted period of uncertainty for patients to a timely and positive conclusion.”

“This is not only important for the 21 patients who are already lucky enough to be on the therapy. It is of even more vital consequence for the estimated 40 others whose quality of life and life expectancy continue to be adversely impacted by not having access to the therapy.”

“The Alpha One Foundation is keenly aware that ground-breaking new therapies for rare conditions require a lot of investment in research and, when weighing up whether such investment is worthwhile in their eyes, pharmaceutical companies will look at the small numbers of patients who have the potential to benefit. However, the Alpha One Foundation firmly believes that research can’t just be confined to the more common health conditions ̶ we have to encourage research into rare diseases and disorders too.”

“Equally, we are mindful that the taxpayer should also receive best value for money. That is why we have advocated outcomes-based models of access and why we are urging CSL Behring to be realistic in its pricing proposals. It is important also to acknowledge the savings that will be made elsewhere in the health system as a result of decreased hospitalisations and requirement for other drugs.”

“With the right attitude and approach, we are certain that there can be a positive outcome that goes a considerable way to satisfying the needs of all the parties concerned.”

“This therapy has already been approved by the European Medicines Agency which clearly sees it benefits.”

“It is available in eight European countries ̶ Italy, France, Germany, the Czech Republic, the Netherlands, Spain, Greece, and Slovakia. It’s time to add the Republic of Ireland to that list. It’s time to put patient’s lives first.”

“Living Proof”
Johnny Hannan, age 67, from Mallow in Cork, is one of the patients to have taken part in the clinical trial for Respreeza in Ireland. He is also at the centre of a social media campaign by a group of young people who have created a video to show their solidarity and garner support, and which has already received over 40,000 views – https://www.facebook.com/sharetosupportjohnnyswonderdrug. He comments:
“I am on the drug Respreeza for over ten years and I am living proof that it works. Some time ago I was told that I might not live to see my 60th birthday. I am now 67 and am a very healthy man again thanks to Respreeza. It has changed my life around and that of my fellow patients. Since September 2016 I have been receiving Respreeza on a month-by-month basis only from CSL Behring, with constant deadlines ahead which is very stressful and grossly unfair. I also find it ironic that the Government funds a detection programme for Alpha-1, but then refuses to fund a proven treatment for the condition. I am very anxious and worried at the lack of progress by the Department of Health, the HSE and CSL Behring in resolving this horrible impasse. As a tax-paying Irish citizen, I deserve a reasonable quality of life, and I would urge all parties to re-engage and agree a practical price to allow me and my fellow patients to have access to Respreeza into the future.”

“Thought I was Going to Die”
Gillian Acheson, age 52, from Glaslough in County Monaghan, is one of the patients who is losing out on the benefits of Respreeza. She comments:
“Alpha-1 is a very frightening disease. You can get out of breath very quickly. Sometimes you can have panic attacks after doing something stressful, but simple. For instance, I was vacuuming one day. I thought I was OK but suddenly I could not get my breath. I felt weak and started to sweat hot and cold. I sat down and tried to get my breath. It took me 15 minutes to come back to normal. I thought I was going to die. I have a young child who is always wanting me to play with her and I feel terrible because I just can’t do it. If I had this therapy it could make such a difference to my life. Even if it could slow down the illness and let you live a little longer. I would like to see my daughter’s wedding day.”

About Alpha-1
Alpha-1 antitrypsin is a protein whose main job is to protect the lungs from infection and tobacco smoke. Deficiency of this protein can lead to severe lung, liver and skin problems, with the majority of people with Alpha-1 presenting, at some stage in their lives, with emphysema or chronic obstructive pulmonary disease (COPD).
The Alpha One Foundation is aware of over 350 people who have been diagnosed with the severe form of Alpha-1 in Ireland, with some of these – depending on their exposure to toxins such as tobacco smoke – developing emphysema as a result. However, it is estimated that 3,000 people have severe Alpha-1 but have yet to be diagnosed.
About Respreeza
Respreeza works by replacing the protein that is lacking in patients with alpha-1 antitrypsin deficiency and slows down damage to the lungs in patients with severe disease. It is delivered once-weekly by intravenous infusion.
About the Alpha One Foundation
The Alpha One Foundation was founded in 2001 to raise awareness, increase diagnosis, promote research, and improve the treatment of Alpha-1. Ireland has among the highest prevalence of the condition in Europe. It is estimated that 3,000 people have severe Alpha-1 on the island of Ireland, with up to 250,000 people with a milder form of the condition at increased risk of lung disease, particularly if they smoke.